The invention of the lip grip has made life easier for some anglers. We can now “grab” the fish, photograph it and release our catch all without even touching it. Gone are the days of slimy hands and bitten-off limbs. 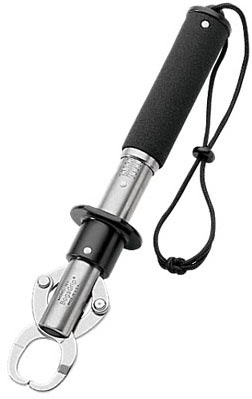 These gadgets are great for clinching onto the jaw of a toothy fish. The supposedly correct way is to lift the fish up with our other hand (supporting the weight of the fish) and have our photographs taken with the fish in a more or less horizontal position.

But there is some debate on the health of fish handled with a lip grip device. It is argued that many fish suffers some form of jaw injury. Some severe enough that feeding becomes a problem and this affects the fish’s chances of survival.

Certain species of fish may be more susceptible to injury in this manner and others may be tougher.

Sadly, you can see anglers using lip grips even on toothless fish like carp, sebarau, peacock bass, tilapia, mahseer, indo-pacific tarpon, all the time. What is the purpose here? Even more frustrating is that some of those fish are really quite small and have very soft mouths. Actually, I’ve seen the teeth and mouth of pacu badly damaged by these lip grips.

Because I release nearly all my catch, releasing the catch in the best possible condition is very important. What is the point of releasing a fish only to have it die a slow death? If you think you must use a lip grip, then think about how it is used. Every fish handled with a lip grip sustain damages one way or another and I have seen many so-called “sport fishermen” being very rough with their catch while using one, all for wanting to get that hero shot.

The thing for fishermen to remember is that the lip grip is meant for holding the catch allowing us to remove the hook safely from its mouth while minimizing the risk of injury to us. If possible, leave the fish in the water while doing this.

The lip grip is not meant for dangling the fish for photographs. Especially if the fish is quite big and heavy and is capable of trashing about.

Also, the accuracy of the built-in weighing scale on these lip grips are largely suspect. Some comparisons were made with certified scales and the difference on some were quite staggering. So if you want to know the weight of your catch, use a proper scale on a net or a bag with the fish in it, safe for release.

If you are fishing for sport and there is intention to release your catch, I say loose the lip grip. Use a knotless landing net. Practice landing even big fish without a net, safely, it is not that difficult a task.

What have your experience been with the lip-grip thus far? Do you think they are ‘jaws of death’ or life-savers?

I love watching videos made by our clients. They give me a different perspective of how they see …

END_OF_DOCUMENT_TOKEN_TO_BE_REPLACED

Watch the video: https://youtu.be/U4B0t-Ftqm4 What happens when a guy who wants to fish all …