Tackle shop owners now have a new breed of customers. Hair stylists and haute ladies looking for feathers to be used as hair fashion accessories. The demand is for hackles — the long, skinny rooster feathers fishermen use to make lures.

Apparently the craze was sparked of by American Idol rocker judge Steven Tyler, who was spotted wearing the feathers in his long hair.

Fly fishermen are not happy that their feathers are being snatched up by these birds with the prospect of a hefty price increase as supplies are running low and some feathers sold online are fetching hundreds of dollars more than the usual prices.

Full story via Shine from Yahoo! 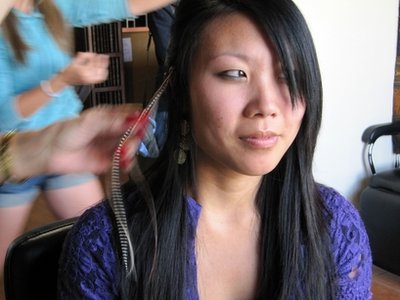 In this photo taken May 24, 2011, Kim Shanks gets feather extensions clipped into her hair at MiraBella Salon and Spa in Boise, Idaho. (AP Photo/Jessie L. Bonner)

BOISE, Idaho – Fly shop manager Jim Bernstein was warned that hair stylists would come banging on his door, but he didn’t listen.Sure enough, less than 24 hours later, a woman walked into the Eldredge Bros. Fly Shop in Maine and made a beeline toward a display of hackles — the long, skinny rooster feathers fishermen use to make lures.

“She brought a bunch up to the counter and asked if I could get them in pink,” he said. “That’s when I knew.”

Fly fishing shops nationwide, he learned, are at the center of the latest hair trend: Feather extensions. Supplies at stores from the coasts of Maine to landlocked Idaho are running out and some feathers sold online are fetching hundreds of dollars more than the usual prices.

“I’m looking around the shop thinking hmmm, what else can they put in their hair?” Bernstein said.

Fly fishermen are not happy, bemoaning the trend in online message boards and sneering at so-called “feather ladies.” Some also blame “American Idol” judge and rocker Steven Tyler, who began wearing the feathers in his long hair.

“It takes years and years and years to develop these chickens to grow these feathers. And now, instead of ending up on a fly, it’s going into women’s hair,” said Matt Brower, a guide and assistant manager at Idaho Angler in Boise.

“I think that’s the reason a lot of people are a little peeved about it,” he said.

The feathers are not easy to come by in the first place.

They come from roosters that are genetically bred and raised for their plumage. In most cases, the birds do not survive the plucking.

At Whiting Farms, Inc., in western Colorado, one of the world’s largest producers of fly tying feathers, the roosters live about a year while their saddle feathers — the ones on the bird’s backside and the most popular for hair extensions — grow as long as possible. Then the animal is euthanized.

As hair extensions, the feathers can be brushed, blow dried, straightened and curled once they are snapped into place. Most salons sell the feather strands for $5 to $10 a piece. The trend has become so popular a company online even sells feather extensions for dogs.

The craze has also left hairstylists scrambling to find rooster saddle feathers, as fly shops hold onto a select few for their regular customers. The businesses will now ask if the feathers are for hairdressing, said Shelley Ambroz, who owns MiraBella Salon and Spa in Boise.

“If you go in and you’re a woman, they won’t sell to you,” said Ambroz, who started to eye her husband’s fly fishing gear after stores ran out.

“He told me to stay out of his feathers,” she said.

Whiting Farms is harvesting about 1,500 birds a week for their feathers and still can’t keep up with its current orders, said owner and founder Tom Whiting, a poultry geneticist. The company has stopped taking on new accounts.

“I’ve tried to withhold some for the fly fishing world because when the fashion trend goes away, which it will, I’ve still got to make a living,” he said.

The company was the one that told Bernstein in Maine several months ago that rooster saddle feathers had somehow become the latest coveted hair accessory. Bernstein said he scoffed at the notion that it could reach his shop along the coast of southern Maine.

“This is Maine, it’s not California. We’re a little behind the trends here,” he said. “I screwed up. I should have said: `Send me everything you’ve got.'”

Bernstein’s inventory of rooster saddle feathers has long been depleted. About three weeks ago, he dusted off a rooster neck with feathers that had been set aside for fly tying classes at the shop. The neck would have normally cost $29.95, but the shop sold it for $360.

It’s not uncommon to find a package of rooster saddle feathers that would have cost around $60 at a fly shop now priced from $200 to $400.

A package of the most popular fly tying hackle for hair extensions, a black and white striped feather called grizzly saddle, would normally retail anywhere from $40 to $60. It sold for $480 on eBay last month after 31 bids.

At the Boise salon, Ambroz has stowed away enough feathers to last about six months.

On a recent Tuesday evening, Emilee Rivers, 16, sifted through a pile of rooster saddle feathers looking for the perfect strands to frame her face. She picked out four and handed them to the stylist, who bonded them together with hot glue before clipping them into Rivers’ blond hair.

Brandi Wheeler, 16, was next. There’s only one other girl at Borah High School in Boise who has the feather extensions, the teenagers said.

Now, they were joining the select few.

“I’ve wanted to get them for quite a while,” Rivers said.

She went to the salon with her mom, Kristi, who totally gets it.

“My dad on the other hand, he’s so confused,” Rivers said. “I told him what I was doing and he said: `Why would you get feathers in your hair?'”

Join our newsletter and get our best articles, catch reports, new products, travel, and rants!
No charge. No Spam. Only love.